She robbed me but I don’t care 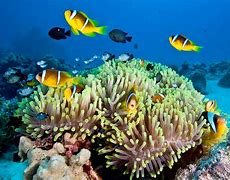 She robbed me but I don’t care

Anyone who snorkels or dives, dreams of the world’s largest coral reef system called the Great Barrier Reef in Australia. The reef, over 1500 miles long and labeled as one of the seven natural wonders of the world, can be seen from outer space. The 3000 reefs and 900 islands support 1500 fish species and one and a half million birds using the islands to breed.
The real me became invisible with full, hooded-gloved  body suits, snorkel, mask, lifejacket and underwater camera. Seconds later floating face down in the bath water temperature I enjoyed the company of dozens of fish. Swimming out to deeper water I found coral of all shapes and colors hiding a multitude of fish and sea life. Schools of pencil fish, one shy octopus, and pointy creatures clinging to the coral ignored the camera.  Four hours wasn’t long enough to take it all in. While I was photographing a blue blob on some coral,  I guess the sea decided it was time for me to leave. While a huge wave caught me off guard it silently slipped my camera strap off my wrist, carrying it to its treasure chest.