Although I have no interest in engineering or canals, the transit through the Panama Canal excited me the entire nine hours it took to go from the Pacific Ocean to the Caribbean Sea. Over 500 photos and 30 movies later, I couldn?t wait for a cool shower and some ice water. The day started at 5:30 a.m. with hundreds of people crowding the decks looking for the best angle to aim their camera. Dozens grabbed tables and loungers and crowded all around the ship?s bow, leaving little room for others to see much of anything. Being creative, I crawled under the forward railing and didn?t leave for five hours.

The incredible engineering feat of the Panama Canal works in a simple way. There are three locks which act like a water staircase, and each of these raises or lowers a ship, depending on which way they are coming through the canal. The ship goes up a total of 85 feet and then comes back down 85 feet.

Tugboats assist each ship as well as electric locomotives or ?mules.? (Originally, live mules were used to pull the ships through). Great maneuverability and power are required to pull ships like the Aurora. There was only one foot of space between the ship and the lock?s concrete wall on either side. The mules weigh 50 tons and operate with two traction units of 290 HP each that turn the mid-track geared drive wheels. The original mules, made by General Electric, cost $13 thousand. The new ones made by Mitsubishi, a Japanese company, cost $2.3 million. As soon as the ship enters the lock area, a rowboat is sent out with ropes from the mules on each side for the ship to connect with two in front and two in back. The mules pull the ship through the canal. Other modern methods failed to work as well as the manual rowing of these tiny rowboats.

Since its opening in 1914, one million ships have transited the canal. Over 10,000 people are employed on the canal to assist with the passing of 14,000 vessels annually. The length is 48 miles, and the average transit cost is $150,000. My ship paid about $399,000.00. The least amount ever paid was $.36 by a swimmer who took ten days to swim the canal. The canal earns 1.8 billion annually. Ship?s captains aren?t allowed to transit the canal on their own; instead a specially trained canal pilot takes navigational control of each vessel to guide it through the waterway.

The expanded lane of the canal, completed in June 2016, cost 2.5 billion dollars and will allow the canal to handle huge container ships; this new ?Panamax? canal permits passage of150% wider vessels, built to fit through the canal. Now, it handles cargo vessels carrying 14,000 twenty-foot containers, nearly three times the amount previously accommodated. The planet?s biggest container ships measure 194? wide by 1312? long, with a capacity of 18,000 twenty-foot containers, but cannot squeeze through the new locks.

An average of 52 million gallons of water escapes after each ship?s transit. The source of the water is Gatun Lake. A lock chamber fills in 8 minutes. If a cruise ship avoided the canal, it would add 23 days. I wondered why my captain didn?t do a survey to learn if the passengers would prefer to pocket the $400,000.00 cost of the transit to pay for all the extra food we would need if we sailed around the tip of South America (12,000 miles) while enjoying the ship?s luxuries another 23 days? I would have voted for that without question! 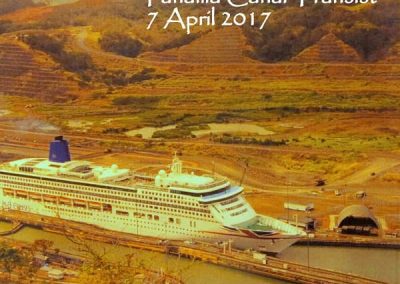 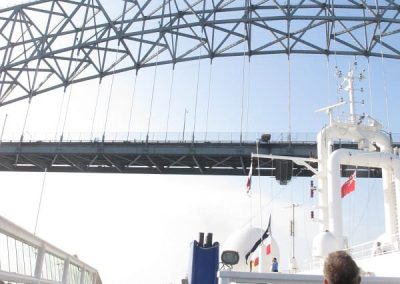 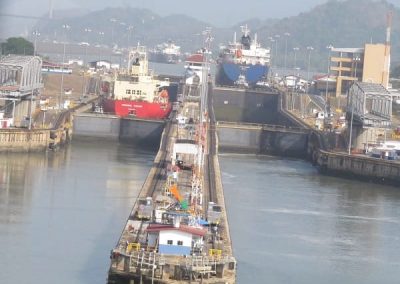 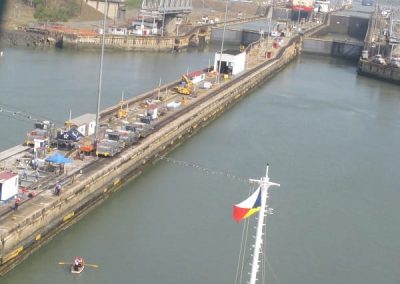 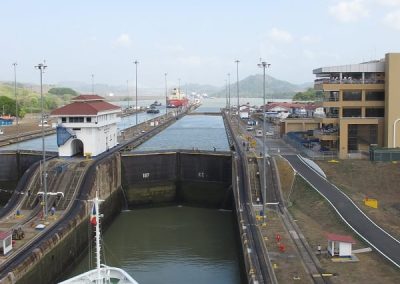 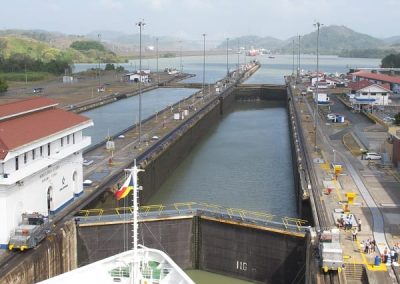 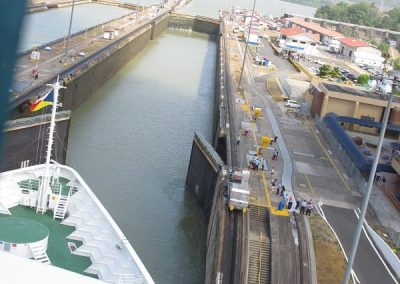 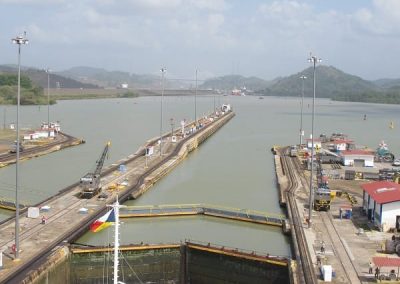 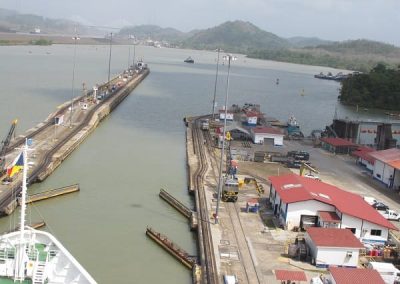 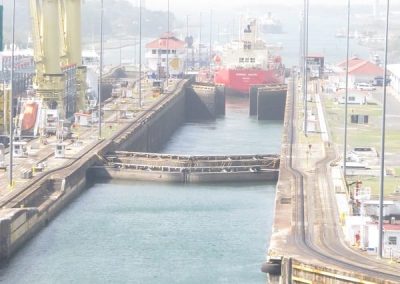