Day 44 | Freemantle Australia | Nailing Yourself To A Board?

The whole secret of life is to be interested in one thing profoundly and in a thousand things well.

While chatting with a man at my dining table a few nights ago, I found out that he was a descendant from one of the prisoners who were kept in the Round House, a jail built in 1830. Decades ago it was a disgrace to admit you were related to a prisoner. He said, ?Now it is almost like a status symbol to have a relative who was a prisoner.?

?Were there any records of why he was imprisoned,? I asked. He said, ?The story goes that he stole a loaf of bread.? I asked, ?Did he ever have to use the stocks.? He said, ?Yes. He was caught drinking in church. And the story mentioned that to keep his head from turning when people would throw stones or food at him, the jailor nailed his ears to the boards.?

Public humiliation was the main reason for using stocks. Some stocks had rails to confine the neck and wrists and feet while others had a seat like the one in the photo with the wrists and neck confined. Stocks became the instrument for punishment for minor offenders, like disobeying a policeman.

After the Round House was no longer used for a jail, the city wanted to tear it down. The Harbor Master living next door had his garden in front of the structure and demanded the city leave the building there to protect his garden from the harsh winds coming directly from the sea. 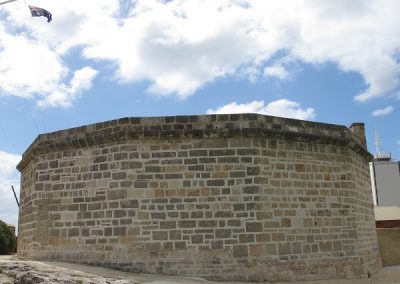 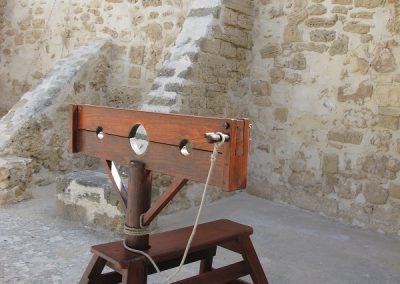